Move to the text

The eyes which do not overlook danger

Staff introduction #01 of the Eyesay

To "Koichi Iwasa of the Eyesay representative," I interviewed an approach posture to inspection work or our characteristic. 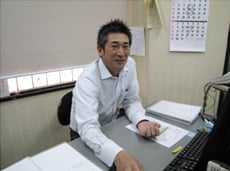 The opportunity that entered Eyesay 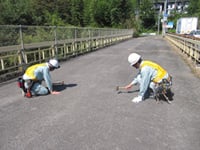 "Is it not a doctor of the structure the catch phrase of the job offer offer of the Eyesay listed in a job offer magazine? "A heart was caught by this (laugh). The customer who had the acquaintance begins to work on Bridge inspection as a new business, and the opportunity when I began Bridge inspection is because I was an early stage of member proceeding to the spot. 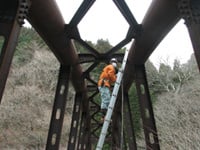 During about 20 years, there were the natural disasters such as a landslide, the tornado with Great Hanshin Earthquake and Chuetsu earthquake, big earthquake such as the Great East Japan Earthquake, flood and it after I began to be engaged in Bridge inspection. In addition, it is frequent about the disasters such as the falls of collapse and the concrete piece of the tunnel. I felt a big problem as the person who took infrastructure maintenance, maintenance each time.
As I cannot solve all disaster damage by oneself one power, also, I think that it is a mission that allows to be one as one team which included a customer and to evade many disasters and, as a company organization, wrestle for duties every day.

I propose a color informed a characteristic well and am conscious of organizing said to, "it is all right if it is Eyesay!", but am the progress period still more. Of course, the forward spirit of self-advancement not to think unreasonableness to be impossible, the challenge mind to a new thing, a unity power, the capacity for organization are not defeated by the other companies!

About safety management of the Eyesay 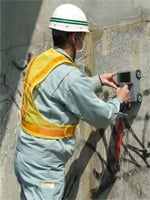 There is the work at the dangerous place including the high place work, but I do not take excessive measures and I always raise a danger level in the daily life and evade unreasonableness and carelessness if possible. The accident decreases if I do so and thinks that smooth safety management is possible.

About from this of the Eyesay